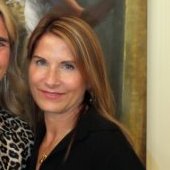 Upon returning to New York in 2002, she continued her academic training in fine art, which included 7 years of formal studies with Jesus Emmannuel Villarreal in the classical academic tradition of the Florence Academy. She also had rigorous training with prominent artists including Christopher Gallego, Kirill Doron, and Dean Fisher.

She is an elected member of the Salmagundi Club in NYC and holds memberships in the National League of Pen Women (Greenwich), the American Artists Professional League, the Portrait Society of America, the Art Students League of New York, and the Greenwich Art Society.

Annette is a co-founder of the North Light Studio in Bridgeport, CT where she focuses on still life. She also belongs to the New Street Guild of Artists, a private guild of representational artists specializing in painting and drawing life models.

Annette has won numerous awards including Best in Show – Paint/Acrylic at the 2015 Greenwich Art Society’s Annual Juried Exhibition. Her work has appeared in many gallery exhibitions throughout Fairfield County and New York City. In addition, her work can be found in private collections in Greenwich, New York City, San Diego, London, and Canada.

She currently works at the Center Oak Studio in Greenwich and North Light Studio in Bridgeport.