George began painting as a young boy, and as a teenager studied under world-renowned watercolorist, Frederick Whitaker. His formal training continued at The Silvermine Art School in New Canaan, Connecticut from 1966 through 1968. Although working for many years as a technical illustrator, his passion continues to be painting.

George has always had a strong emotional connection with his surroundings and with the changing seasons. He believes that certain feelings evoked by a particular scene at a moment in time can only be expressed visually and he says that there is tremendous satisfaction in being able to share those feelings through his paintings. “I guess that’s why I am a painter and not a writer.” While his work is definitely representational, he does not strive for extreme realism. “Sometimes detail is more powerfully implied than spelled out.” More important than describing every leaf or every blade of grass, is to have the values under control. “When you get the values really right along with the lighting, other aspects of a painting become almost secondary.”

Mr. Stewart generally works from photographs and small pencil studies done on location. “I find that when everything comes together for just a moment — the sky, the light breeze that plays on the surface of the water etc., that moment is very short.” For that reason, although he enjoys plein-air painting, he generally prefers to complete his paintings back in his studio rather than working at length under changing conditions.

George says he tries not to be overly philosophical about his subject matter or his technique, but prefers that his paintings speak for themselves. 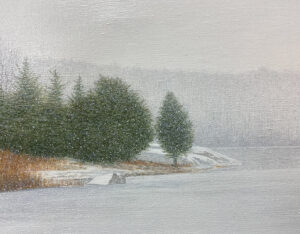 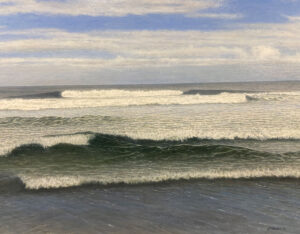 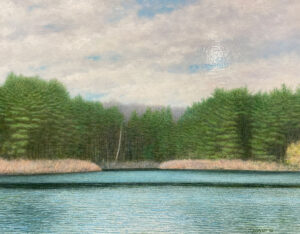 Early Spring at the Reservoir By George Stewart