Since the days of the Impressionists, art lovers have been aware of the electrifying role that color and light can play in a painting. To this day, painters who emphasize color and light in their work still entrance and delight viewers and collectors alike. In its second show of the fall season, the Geary Gallery exhibited the work of two painters — Michael Aiezza and Judith Carbine–who make stunning — yet diverse — use of both elements.

Michael Aiezza began his study of art while an undergraduate at the University of Connecticut and completed his formal training at the Art Students’ League and the National Academy, both in New York City. He later studied with Peter Cox, Harvey Dinnerstein, Ronald Sherr and Aaron Shikler, and has taken workshops with Don Stone on Monhegan Island, Maine, Milt Kobayashi at the Scottsdale Artists School in Arizona, and with Kim English at the Fechin Institute in New Mexico. Many of Aiezza’s paintings feature the architecture of Europe, including that of Italy, where he was born, as well as that of such local venues as Hartford. Aiezza spent a number of years doing building restoration work and his familiarity with and fondness for older buildings is evident in his art. More recently, Aiezza has focused his attention on landscapes, in particular on the cornfields and winding roads of the Farmington (Conn.) area. Like Carbine, Aiezza takes a great deal of care with the composition of his paintings. “I look for a pattern of light and dark right away–forgetting color,” he says. “Then I see how it works in the space. If I’ve got the right elements, oftentimes the painting will paint itself.” Also like Carbine, Aiezza works out-of-doors as much as possible. “I like the freshness that comes of figuring out the colors and values right there.” Aiezza’s works are in private and corporate collections in the U.S. and abroad. 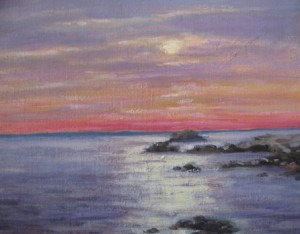 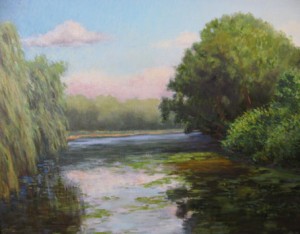 By the Willow By Michael Aiezza 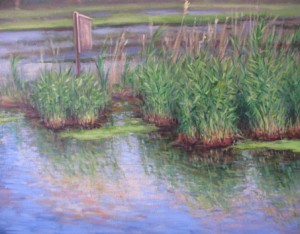 Afternoon in the Marsh By Michael Aiezza