Richard Danzig is an artist with studios in Montauk, New York and La Jolla, California. Richard is a juried member of the Spanish Village Art Center located in Balboa Park, San Diego, California. He is also a member of the RPAC Art Center and the East Hampton Art Alliance. Richard’s work focuses on the beauty of bi-coastal seascapes as well as vivid abstracts.

“Art is the highest form of hope.” — Gerhard Richter

“Richard could be considered an “outsider artist” in that he’s had no formal training, but that wouldn’t be evident from his refined and mature style. He combines brushwork with scraping and pulling paint across surfaces such as paper, canvas or transparent vinyl, using squeegees, rulers and other implements – a process that he invented. It would be easy to miss the mark when using this technique, but Richard never misses. He finds a way to incorporate his deepest feelings into his images. They are often moody, pensive and sometimes nostalgic. They speak of things we all experience: resilience, loss, uncertainty, celebration, wonder. He brilliantly captures the ocean, which he intimately knows, having resided on both East and West Coasts. His seascapes suggest the depth of the water and the vast expanse of the horizon in an almost impressionistic fashion. Transparent vinyl often enhances their dimension. More importantly, they capture the way that he is looking at the water, as if his own feelings are reflecting back at him from its gleaming surface. His abstracts use similar techniques to incorporate feeling using only color, texture and opacity. They are subtle, moving and deep when experienced in person.” 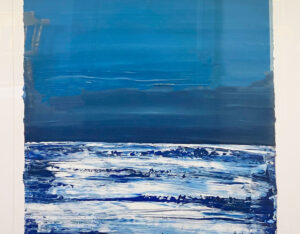 The Churn By Richard Danzig 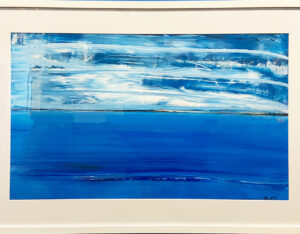