Roger R. Milinowski, born 1946, in New York City, spent his early years in Peekskill, NY on the shores of the Hudson River. He received a comprehensive education in the visual arts and a degree in Industrial Design. Milinowskiâ€™s natural artistic ability surfaced very early in his life and was nurtured by a rich interaction with nature while living amidst the exquisite beauty in the Hudson River Valley and later in a picturesque costal Connecticut town. He was further inspired by yearly trips to the magnificent coast of Maine that eventually led to becoming a permanent resident. His studio/gallery now boasts a view of one of the prettiest harbors in Maine.

His career has included working with prestigious design firms and clients as a designer, illustrator, and art director. His technical proficiency in his work combined with his sensitive observations of the world around him lead to producing paintings that calm the mind as well as speak to the emotions. The quaint settings of coastal America and rural country farms are perfect subjects for Milinowski’s realistic yet sensitive artistic style.

When I paint I love to drop below the clutter of today’s busy images and bring out the suggestion of a quieter, more nostalgic time.

In viewing many of Milinowski’s paintings, the observer is moved beyond the mere depiction of the subject matter into a reverie of bygone eras. Extended stays in the Charleston, S. C. area provides material, including wild life in the Low Country, shrimp vessels, and Charleston Street Scenes, that lends itself to Milinowski’s insightful artistic expression.

Milinowski travels the coast of the Eastern United States and abroad painting en plein air and gathering field studies that are used as reference material for many of his compositions.

“Although I create paintings under many different circumstances, I am most excited about painting en plein air. There is an immediacy about painting directly from coastal and landscapes – capturing a moment in time that I find very stimulating.”

Both his two- and three-dimensional works have received numerous awards and are found in private and corporate collections in the United States, Israel, Canada, Australia, and England. Milinowski’s work has been exhibited in galleries and art shows in New York City, Fairfield County, Connecticut, Martha’s Vineyard and Cape Cod, and Charleston, S. C.

Milinowski moved to Boothbay Harbor, Maine in 2000 with his wife Judy. Now his full collection of paintings are available for viewing at his studio/gallery, Head of the Harbor Gallery in Maine. His work can also be seen at Gateway Gallery, Wilton, CT, Geary Gallery Darien, CT, The Virginia Barrett Gallery, Greenwich, CT, Bartholomew Gallery, Chatham Ma. Cape Cod and CoCo Vivo, Charleston, S.C. 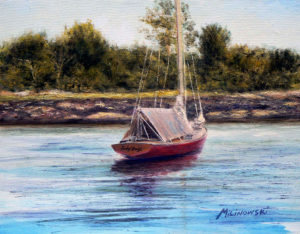