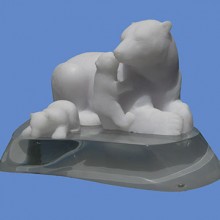 The realistic approach that Shawn McAvoy reflects in his sculptures is a testament to his respect for the natural world. His attention to every detail is precise, depicting his subjects in an exceptional fashion, capturing extreme realism from every angle. Growing up on Long Island and spending time in the Adirondacks, Shawn developed an esteem for nature. Since he was a young man, Shawn had an opportunity to observe the wildlife of the North Country while staying at the family cabin in Indian Lake, New York and hiking through the woods. Shawn, a self taught artist, sketched the animals he saw there, and as an adult he experimented with different media until he found his niche — sculpting wildlife in clay. As a member of the Huntington Arts Council his work has been exhibited in various shows since 2006. Shawn’s awards include an “Award of Excellence” from the Oyster Bay Art League for his “Snuggling Manatees” also a “Best in Show” award in the 2006 “Art in the Park” from the Art League of Long Island. His “Right Whale Breaching” piece has been included in a televised special “The Secret Life of Georgia’s Whales” produced by Atlanta based WSB-TV. In 2007 Shawn had an exhibition at the Adirondack Lakes Center for the Arts in Blue Mountain Lake, New York. In 2008 Shawn was honored by being invited to join the fine art group “Long Island Professional Artist Showcase” with whom he has toured in several fine art shows since. In 2011 Shawn’s sculpture was included in an invitational show entitled “Water World”. In 2012 his eagle sculpture “Majestic Vision” was placed on a 14 foot pole above the pilot house of the 138 foot paddlewheel steamboat “Minne-Ha-Ha” touring boat on Lake George in New York’s Adirondacks. Shawn’s work has been exhibited in galleries throughout the east. The drama depicted in his sculptures makes them come alive, as if freezing for a moment in time. 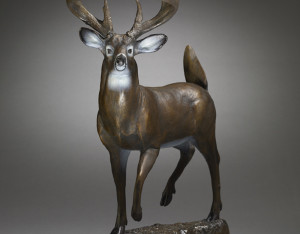 Power and Grace By Shawn McAvoy 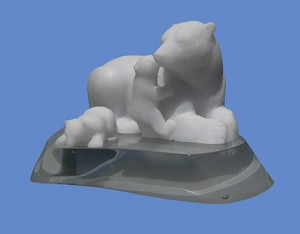