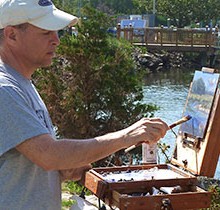 Tony D’Amico is an artist who defines his job simply as follows… “I am a visual journalist capturing scenes of everyday life that are too often overlooked. The resulting work conveys my idealized interpretation of the subject matter.”
Beginning employment as a commercial artist/illustrator, Tony enjoyed a successful career in the corporate world working for such companies as American Home Products, Playtex, and PepsiCo. He then founded his own promotional marketing agency, Creative Alliance based in Southport CT. The client roster included, The Pepsi-Cola Company, AT&T, Tiffany & Company, ebay and the Guinness Importing Company. Evolving into one of the top promotion and event marketing agencies in the US, he later sold the company to the Publicis Group, an international advertising and media services conglomerate.

Channeling his creativity into a full time career as a fine artist, Tony has studied with a number of nationally recognized artists such as Donald Demers, Kenn Backhaus, Randall Sexton, Kathy Anderson, Gabor Svagrik, and David Dunlop. The diverse subject matter of his work is most often fueled by his plein air experiences along the east coast. He has been featured several times in Plein Air Magazine’s online blog Outdoor Painter as well as Fine Art Connoisseur’s Fine Art Today. His work has won many awards, most recently, the Award of Excellence at the Oil Painters of America Eastern Regional Exhibition in Annapolis, Maryland and the Florence and Ernest Thorne Thompson Award at the Allied Arts of America 100th Annual Exhibition at the National Arts Club in New York City. He is a member of the Salmagundi Club in NYC, Oil Painters of America, Connecticut Plein Air Painters, Lyme Art Association and is represented by The Geary Gallery in Darien, CT.