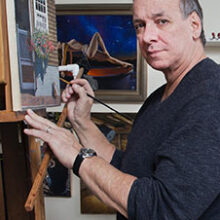 As with most artistic people, George Angelini started drawing at an early age, trying to faithfully record his surroundings whether that meant a landscape, a classic car or his family members. His parents encouraged his interest, buying him endless supplies of pencils, crayons, erasers and reams of paper.

However, Mr. Angelini started formal training in art later in life taking his first art class as a senior in high school. He impressed his teacher with his first pencil drawing and earned accolades for his ability to draw within a solid composition.

Having his eye on a medical career, Mr. Angelini applied and entered New York University to study in that direction. Art was calling him, however and to his parents’ chagrin, he applied and was accepted to The Cooper Union in New York City taking extensive drawing, print making and sculpture courses.

He earned a BFA and worked as a successful illustrator nearly thirty years before settling on a fine art career. In his current work he is trying to evoke a mood with realism so that the viewer can experience the same emotion that made him originally want to paint the scene.

Mr. Angelini believes true happiness comes from following the path that one was meant to follow in life and he thinks that, after many years, he is finally back on that path.

Putting a brush to panel and creating a realistic scene is an inspiring and magical process for me, which I try to convey through my work. Being a contemporary realist evolved from my desire to create paintings that would evoke a deep sense of the mysteries of the world around us while retaining the essence of the reality in front of us. After years of illustration work, I gravitated toward work of greater skill and precision in execution. The subject matter of my still life, landscape and figurative works represent the complexity of what I see as well as respect for nature and life. Some paintings represent a simple message I’m trying to relate through ordinary objects placed together, while other paintings celebrate the serenity or power of land and sea or the sensual beauty of a human figure. I hope that the viewer will observe my work as I observe life, with the impact of the large idea supported by the importance and intricacy of the smallest detail. I strive to make artwork that is sensitive, balanced and truthful using the continual drama of light, color, and movement. I’m looking to evoke that inspiration in another person by having them feel what I feel when they look at my finished art.

2017 – Recognized as an Oil Painters of America Signature Artist

2016 – Recognized as a NOAPS Signature Artist 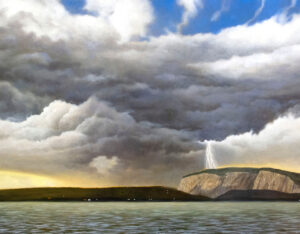 Wrath of God By George Angelini 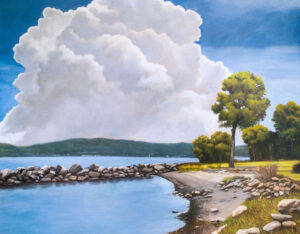