Artist Robert S. Brown was born in Queens, New York and raised on Long Island where he now resides in the town of Lynbrook. He began drawing and painting as early as kindergarten in the mid-1950s. While always excelling in art during his schooling, it became clear to him that he desired to pursue a career in art. Upon graduation from high school in 1971, Brown enrolled at the Pratt Institute in Brooklyn, NY. Since he long admired many American illustrators of the century such as Norman Rockwell, Howard Pyle, N.C. Wyeth, and many others, it was clear to Brown that he, too, wanted to become a professional illustrator.

Brown began creating book covers for the publishing industry while specifically concentrating on the paperback marketplace. He has worked for companies such as Bantam Books, Scholastic Publications, Avon Books, Simon & Schuster, Dell Books, and many others. His work can still be found in bookstores and online. Brown has taught at many universities and still continues to teach all age groups privately as well. Although he can draw and paint in all mediums he currently specializes in acrylics while concentrating on realism.

Brown has had many local library exhibits, as well as several gallery exhibits in the New York vicinity, as well as Connecticut. He was also featured in Artist Magazine for his adept skills and his current acrylic series of still life.

“I am quite passionate about acrylic paint and its diversity as well as my ability to control light and shadow which is the basis for any good painting. No other medium affords me the control of acrylic when working opaquely or transparently which in fact represents the true power of acrylics.

“I will likely not use oils again as it does not allow me the latitude of acrylics while also, I cannot control the time factor and odor of oil paints. I actually find it necessary to expedite drying time while I work in water base paint for the blending and glazing which separates my work from other artists using this particular medium.” 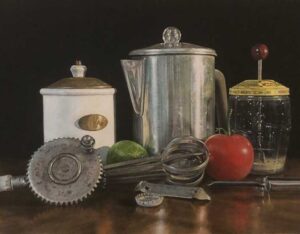 Beat It By Robert S. Brown 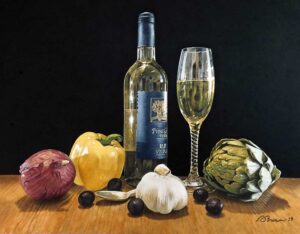 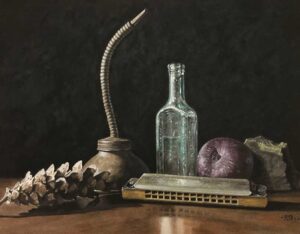